I originally picked up this recipe from my friend Karen, who brought it for my fam after James was born.  It is tasty, hearty, and filling...everything a beef stew ought to be.  (This recipe is also dairy free for you folks with allergies or intolerances.  This was great when I was nursing James and needed lots of protein since he could not handle any kind of dairy in my diet.)

In the interest of time, I'm just going to give you the link to the recipe for Carol's Beef Stew and list a few little additions I make.

I add about 2x the ketchup called for in Carol's recipe, and I also add about 1tbs of worcestershire sauce and 1/4C of whatever red wine or cooking sherry I have on hand.  I've used Cab Sauv and Malbec. Both were very nice, though beware of adding to much.  Turns a bit coq au vin in my opinion.

I also like to add about 3/4 C chopped mushrooms, which also dresses it up a bit.

As a bonus, Karen has a recipe for traditional white bread on the same post.  The bread is perfect for sopping up that extra gravy.

Enjoy!
Posted by Andrea at 7:05 PM No comments:

Chicken noodle soup is iconic in American gastronomy, and I usually have no desire to depart from its classic taste.  The recipe that follows is really nothing special, but I'll include some tips to make this recipe almost effortless to make and share.  This is my go-to when I'm taking a meal to family with a new baby.

Directions
1.  If you are using chicken breasts or a whole chicken, sprinkle with salt, pepper, granulated garlic and paprika.  Roast in the oven at 375 until juices run clear (The time really varies depending on your cuts of meat.) If you are using a rotisserie chicken, skip this step altogether.*
2.  Heat broth** to boiling and add onion, carrots, celery, and rosemary.  Reduce heat and simmer until vegetables are tender but not mushy.  Remove woody rosemary stems if needed.
3.  Add chicken and noodles or rice and simmer until noodles or rice are tender.
4.  Serve immediately with warm bread and salad for a complete and tasty meal.

Notes:
*The rotisserie chicken has made this recipe so easy!  However, if you have a chicken to cook up or you are just trying to save money, get the same seasoned taste of rotisserie chicken by roasting chicken with skin on and rubbing with ample amounts of the seasonings above.

**I have made my own stock in the past, but I guess I have a taste for salt so I always end up adding some bouillon cubes to give the broth more flavor.  I have cooked some of the chicken bones with the broth, even when I use commercial broth, and I think it gives the base a richer flavor.  You could also cook a whole chicken or whole chicken parts by poaching (boiling) and use that as your stock.  It does require quite a bit of extra seasoning, though, in my opinion.  So, if you're going for ease and speed, commercial broth or bouillon is the way to go.

***I tried to take my own pics but my camera is not conducive to making indoor pictures look very appetizing.  When Kevin saw me trying to style up a bowl of chicken noodle soup he said, "Eeee...that's looks gross."  And it really did.  So, this picture is pretty close to a bowl of the soup made from my recipe and a whole lot more appetizing than my pictures!
Posted by Andrea at 9:00 AM No comments:

On Saturday, Monica pariticpated in her very first ballet class.  The hallway was all a-flutter with proud and excited parents, waiting for their turn to take videos and snap pictures of all the bouncy, sweet little girls in the studio.  I didn't get any pics of the class itself (forgot the camera!), but here are a few shot at home. 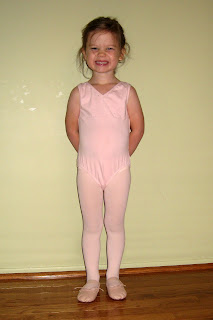 I tried to have Monica assume first position for a pic but this is as good as it got. I guess further instruction will be helpful. I do love her funny stylings though. 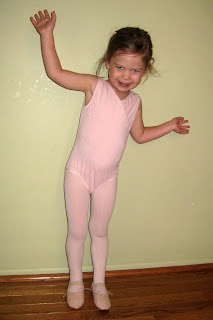 Posted by Andrea at 4:00 PM No comments:

On Friday, we played and explored at the local Children's Garden. The day started stormy, but became beautiful and bright by late morning. Gotta get out in the fresh air before the cold weather really sets in! 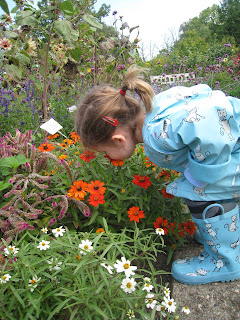 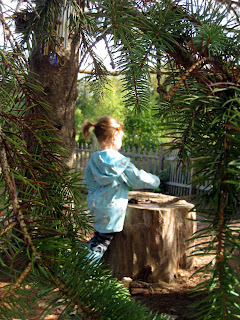 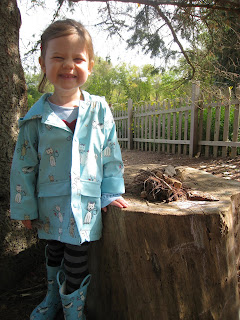 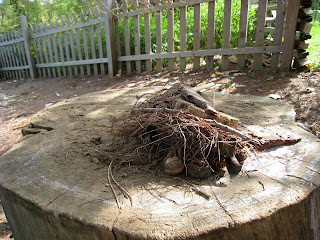 (When Kevin saw this pic, he said, "What's this pile of rubble?" Way to encourage creativity, right? Fortunately, Monica wasn't in ear-shot and I don't think she knows what "rubble" means anyway.)
Posted by Andrea at 9:00 AM No comments:

Since fall and the inevitable beginnings of cooler weather are setting in, I'm starting a little recipe series: Souper Saturdays.  So, for an indeterminate number of Saturdays, I'll post my favori,e and perhaps experimental, soup recipes.  I can taste the spoonfuls of steamy goodness now...

As much as I love summer and sun and warm weather, I love fall for all of the tasty soups that come back to our family's menu.  One of our favorites is Turkey Chili.  I really wasn't much for cooking until Kevin and I were married and this recipe for Terrific Turkey Chili is one of the very first recipes I bothered to file in the recipe box my aunt gave me at a wedding shower.  Over the past 7+ years, I've tweeked the recipe several times and now it is savory-spicy perfection.

This recipe is really easy to adapt for vegetarian tastes.  Just eliminate the turkey, add a can or two of beans and substitute vegetable broth or stock for the beef broth, but I would still add the taco seasoning to give it that kick.  As a side note, I recently started making my own taco seasoning and it is fabulous: tastier, cheaper and no artificial ingredients.

Pair this chili with some cornbread or tortilla chips and beer and you have a sure winner for Football Saturdays.

1.  Heat 1 tablespoon of oil in a large stock pot over medium-high heat. Crumble turkey into the pot, stirring with a wooden spoon to break apart as much as possible. Season with taco seasoning mix and mix until meat is evenly coated with seasonings. Continue cooking, reducing heat if necessary, until turkey is well browned.
2.  Pour in beef broth, and simmer to reduce liquid slightly, about 5 minutes. Add salsa, tomatoes, beans and green chilies, and continue cooking at a moderate simmer for ten minutes. Adjust the thickness at any time you feel necessary by adding water.
3.  While chili is still cooking, heat one tablespoon of oil in a large skillet over medium-high heat. Cook onion and green bell pepper, stirring occasionally for 5 minutes, or until onion is translucent and bell pepper is lightly browned. Add onion and bell pepper to the chili, and continue cooking at a very low simmer.  Again, adjust the consistency with water as needed.
5.  Ladle chili into serving bowls. Top with sour cream, green onion, and cheddar cheese, and serve. 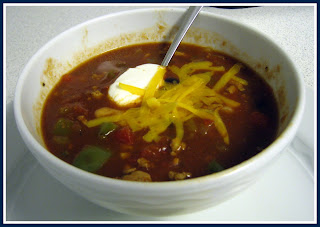 Posted by Andrea at 9:00 AM No comments:

As mentioned in the previous post, we attended a wedding over Labor Day weekend, and I indulged in a couple of projects for the event.

Last Spring, I bought this dress for Monica at Target: 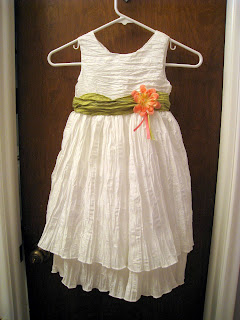 There was just something about its white fluffiness that I could not resist. It also made the perfect dress for the wedding. A bit flower-girl-ish, but whatev.

The one thing I didn't like was the flower. It was just chintzy, like something you'd find on a discount silk floral shelf. 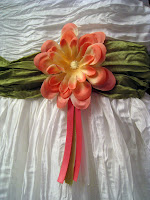 So, I set out to make one myself. After some googling, I found this list of fabric flower tutorials and was immediately drawn to this one. I love peonies and the results for this project looked really voluminous and realistic.

Monica and I picked out the fabric together: a pale pink taffetta for the petals with matching netting to layer in between.  The project was relatively easy, though I definitely would pass on the taffetta next time.  Satin would have curled in the heat of the candle flame much more readily I think.  And in contrast, the netting curled so quickly I ruined a lot of my petal cuttings.

I also used invisible thread to attach the clear crystal to the middle of the flower instead of standard thread.  This ensured that there wouldn't be any detraction from the shimmer of the clear crystal. 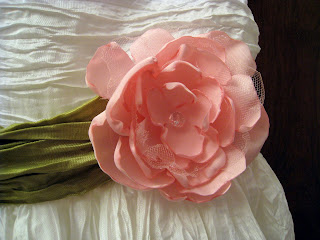 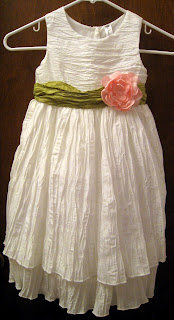 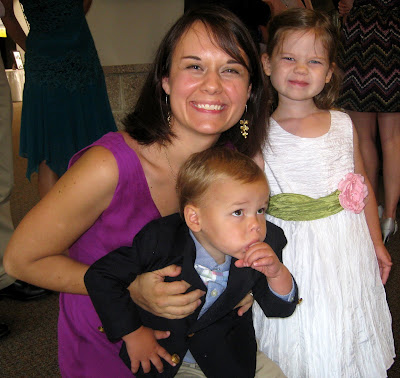 Chic-chic and sassy!
Posted by Andrea at 4:59 PM No comments:

The family and I had the opportunity to attend a wedding in Milwaukee over Labor Day weekend...which of course gave me the opportunity for fun, wardrobe-enhancing projects.

This was my first sewing project for James and has been on my list of sewing to-dos since we received the invite: a Brooks Brothers-esque bowtie. I wanted all out preppy cuteness.

While in DC with Kevin in the spring, I actually stopped in a Brooks Brothers store to look at bow ties, just to get an idea of sizing, price, fabric type and quality etc. First, Brooks Brothers does not carry a lot in 2t size range. Second, it really is a bit too expensive for my 2t kid's messy stylings. There is a reason why I frequently comment that I am raising Pig Pen incarnate.

I surfed the web looking for a good bow tie tutorial and ended up settling on this one at Prudent Baby. Apparently, the bow ties debuted in a photo shoot for the Martha Stewart wedding blog, and got enough attention that Prudent Baby created a tute. Works for me!

The only challenge for this tutorial was that I needed real bow tie hardware, which I was able to order readily on Etsy: three bowtie hardware sets for about $5 with shipping.  (You bet I'll be using this tute again at Christmas...think brother/sister Christmas eve coordinates...)  And, while we're on the subject of cost, this project, fabric, interfacing, hardware and all, probably cost about $5.  Thrifty and fabulous!

A few notes: Sizing was definitely a trial and error experience.  The tutorial sized the bow piece to be a bit large in the name of funkiness.  \Honestly, it was a bit large for my preppy sensibilities and my two year old's face. I wanted to avoid anything resembling a clown bow tie.  So, I took the bow tie width down an inch and kept everything else the same.

The tutorial called for double sided fusible interfacing, which seemed to totally mystify the lady at the fabric cutting table at JoAnns, so I just went with a medium weight, single sided fusible, which I fused on both sides of the piece that is folded into the bow.  This provided the thickness and texture needed for the bow tie to hold its shape and resist drooping.

After making my bow piece, I also realized that I needed to be more strategic in which part of the madras pattern I cut out.  Not all cut pieces are created equal, and I really wanted to pick up more of the pink and white, as opposed to the medium blue.

I ended up making the neck strap twice because the first time, it was too short, and I also made the middle connector loop twice becuase I sewed it too small the first time (I thought the tute called for a loop that was too big, turns out I was wrong!  Though, I think it could be a bit more snug, so I may tack the bow to the connector at some point.)  So, I ended up making the whole thing twice, with one set of pieces being not quite right.  Oh well...so it goes with sewing and garment construction.... 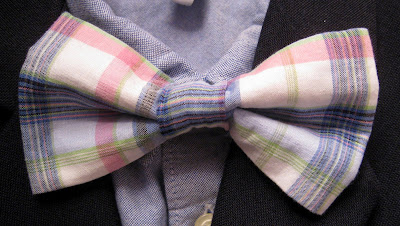 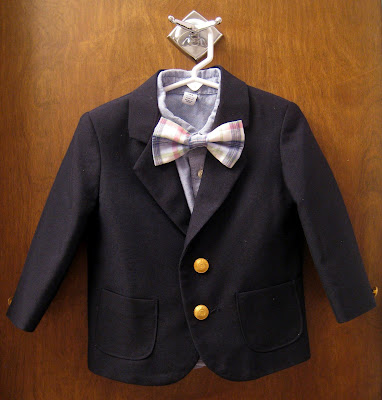 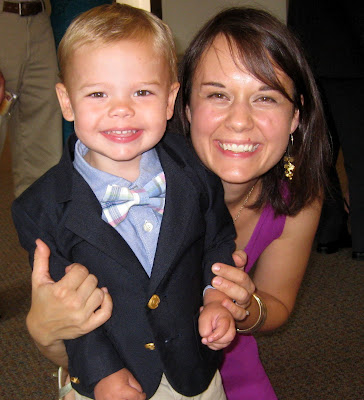 So cute. Totally worth the effort!
Posted by Andrea at 4:35 PM No comments: