Most days, I just don't have the words to blog. The energy drain that is the first trimester has taken its toll on my productivity. The house is just messier and my nap is just as crucial as Monica's. There are days when 9pm rolls around and it is almost too much to even hold a conversation. I just start blubbering about "tired," "bedtime," and "I just can't (fill in the bland of whatever Kevin has asked about/wanted to do)".

But as with all things, this too shall pass, and I'm going to enjoy my naps while I can get them. I'll be back to the blogosphere some time soon...
Posted by Andrea at 2:15 PM No comments: 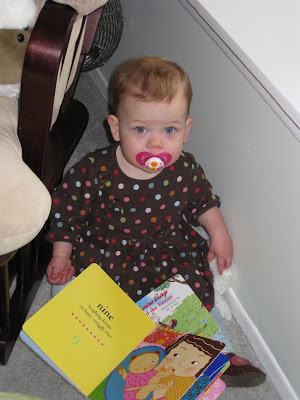 Posted by Andrea at 2:13 PM No comments:

Monica has always had her share of feeding drama, and the past week has been no exception. Here's the latest on Monica and her nutritional drama. I found some blogs of moms dealing with this particular issue to be very helpful, so I thought I'd share a bit of our story.

A few weeks ago, Monica broke out in some wicked evening rashes. I hadn't seen anything like it before, and was a bit concerned. For a week, I thought it might be heat rash due to teething. As the rash grew worse and spread to her legs, looking more and more eczema-ish, I knew deep down it was something dietary. Since we hadn't really added anything new in a while, my first suspicion was soy.

I was a little dubious at first since Monica was drinking soy formula without a problem for months, but kids develop allergies/intolerances so it was not out of the question. We went to the pediatrician for her one year check up and the rash was in full force. It wasn't hive-ish and hadn't really flared with one specific instance or food, so there was not much to do but start eliminating things. I pulled the soy from her diet and within 24 hours, the rash started to improve and has continued to improve with each day. So, here we are with what I am pretty sure is an MSPI toddler.

We've known that Monica has been milk intolerant since she was 4 months old, and the soy intolerance is not a total surprise, though I really thought she'd miss out on that since the soy formula was good to go for so long. But, regardless of the past, here we are.

The most challenging thing in eliminating soy was finding protein and fat sources. A lot of the failure to thrive suggestions are dairy based, heavy cream, cheese, whole milk, butter etc, and not an option for Monica. So, after some internet research, I started giving her rice yogurt with rice protein powder and canola oil mixed in. Not the most appetizing thing, but she likes it. The rice yogurt has a whole lot of sugar, so I think that's what keeps her happy. I also put the mix ins in applesauce. I tried enriched vanilla rice milk with the mix ins but she was less than pleased with that in the bottle. After three tries, she screamed when she saw the bottle at all. So, bottle weaning was rather abrupt in our house!

Monica has never been good with a sippy cup (more of a toy than a drinking tool) so we tried the regular cup. To our surprise, she picked it up and started gulping watered-down juice. I tried the rice milk in the cup but she just shoved it away in disgust. At this point, we're just looking for any fluid intake, so juice it is. There has been a learning curve with the cup (i.e. no shoving food in the cup, keep your hands out of the cup, don't dump the cup), but all in all, I was really surprised at how fast she picked it up.

I'm also going to give Monica a multi-vitamin, but I have yet to find a good source for calcium, since I'm not sure she's ready for a lot of citrus (calcium fortified OJ) and gobs of leafy greens do not make their way into her diet. Keeping Monica soy and dairy free is not easy. We have to bring food wherever we go, and I read labels like a hawk. I'm just remembering that for her to grow out of these intolerances, she needs to be free of the offending foods.

I had been preparing two meals much of the time since Monica can't have dairy, but with this new development, I decided to do some research for meals that we can all eat. I found this great blog, MSPI Mama. She has an MSPI little guy and has TONS of recipes for families with this dietary issue. She even has a dairy, soy free recipe for S'More cookie bars!

So, a no-dairy no-soy life is possible. I must admit that when I faced this at first, I thought it would be the biggest pain. However, now that we're in a routine, it's just part of life. Here's hoping that Monica will be able to eat ice cream on her next birthday!
Posted by Andrea at 2:11 PM No comments:

Here are two pics of Monica as a chicken/duck...whichever you want it to be.

I think the one of her standing is pretty funny because you can really see the funny-ness of the costume and she's missing a slipper. 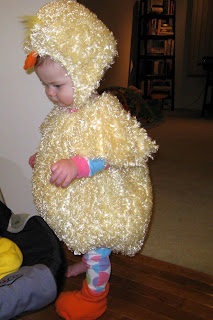 Lounging in the stroller, chomping on the Precious is just classic Monica. 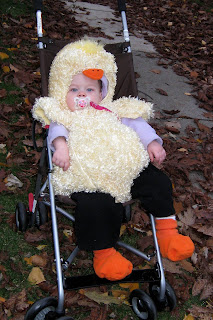 My Two Excuses for Lack of Posting

While it's not unheard of for me to go long stretches without a post, nearly two weeks is a long time! The time I normally would have spent writing/reading/blogging has been taken up by the unavoidable urge to sleep whenever possible. There are two reasons for this: 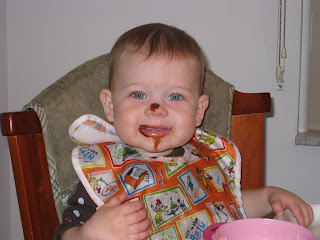 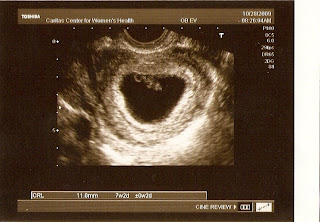 That's right, Baby 2.0 is on the way. I'm just over eight weeks now. It's funny, with Monica, I never would have dreamed letting anyone but family and close friends know until at least 12 weeks. I was so nervous with Monica - nervous that she would be unhealthy, that I would miscarry, that something, anything, would go terribly wrong.

I feel completely different about this pregnancy. Yes, the possibilities for loss, etc. are still there, but I am willing to accept those possiblities more readily and rejoice in the baby here and now...even through the sickness and exhaustion!

With Monica, the First Trimester Yuck extended way into the second, so I'm hoping for a bit of a reprieve this go round.

Here's to another baby and many more adventures!
Posted by Andrea at 1:10 PM 5 comments: 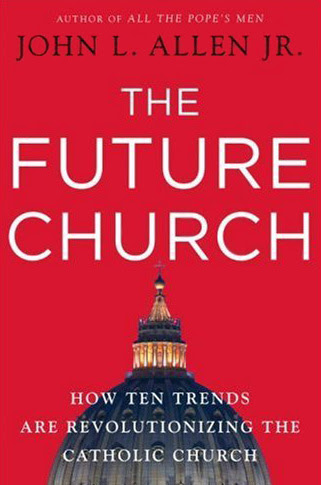